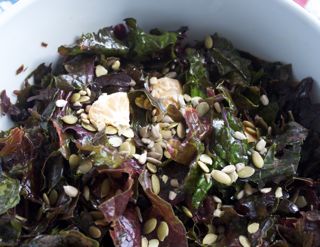 This recipe works well with any type of kale and you can substitute the fresh and dried fruit with whatever is in season. We served it alongside spring rolls and rice the other night to 6 adults and 5 kids, but I would double the recipe next time for a group that large since it was eaten up quickly.