Thanks to Jasmine for sharing this article:

The introduction of the Community Supported Agriculture concept – which has resulted in over 12,000 wildly popular CSA farms across the country today – is most often credited to European or Japanese models that were first adopted by farms in the U.S. in 1986. But, as with many dynamics of history, there is an overlooked story that tells us the credit belongs to someone else.

As early as the 1960s and 1970s, deep in the heart of Alabama, the concept of community supported agriculture was developing as the brainchild of a pioneer of sustainable agriculture who was raised on his family’s farm and was passionately advocating for what he called “smaller and smarter” farming.

Booker T. Whatley, born in 1915 in Anniston, Alabama, always knew his passion was in agriculture. Growing up on the farm as the oldest of twelve, he was raised during a time when black farmers were nearly one million strong. Whatley watched first hand as the number of black farms began to decline and family farms struggled to compete with the industrialization of agriculture. He decided to study agriculture at Alabama A&M University and, after serving in the Korean War where he was assigned to manage a 55-acre hydroponic farm providing food to the troops, he returned to get his doctorate in horticulture and began his career as an agricultural professor at Tuskegee University.  Dr. Whatley’s legacy was his advocacy for regenerative farming, a sustainable and organic farming method that focuses on regenerating soil and maximizing biodiversity, and is a method that can be traced back to another Tuskegee legend, Dr. George Washington Carver. But Dr. Whatley also strongly believed in regenerating farmer livelihoods through direct marketing, and he began advocating for Pick Your Own farms and what he called Clientele Membership Clubs.

“…The clientele membership club is the lifeblood of the [farm]. It enables the farmer to plan production, anticipate demand, and, of course, have a guaranteed market. The farmer has to seek out people—city folks, mostly—to be members of the club. The annual membership fee, $25 per household, gives each of those families the privilege of coming to the farm and harvesting produce at approximately 60 percent of the supermarket price…one of these 25-acre farms should be able to support 1,000 member families, or around 5,000 people…[The farm] should be located within 40 miles of some metropolitan center; that’s pretty much a prerequisite for setting up one of these farms…”

This description of Dr. Whatley’s innovative marketing concept actually came from a 1982 interview he did with this very magazine, MOTHER EARTH NEWS. That was four years before what many believe to be the start of the CSA concept. And Dr. Whatley had long been spreading this idea along with his other philosophies. He’d become a well-known agricultural expert, publishing his monthly Small Farm Technical Newsletter that reached over 20,000 subscribers across the U.S. and in 25 foreign countries. Many of his ideas appeared right here in MOTHER EARTH NEWS, Organic Gardening magazine and The New Farm magazine. He also traveled throughout the .S. and internationally to give training seminars and his overarching message was that you could make $100,000 on 25 acres using regenerative farming techniques and following his direct-marketing plans.

He put his plans into a simple guideline that he called “The Whatley Diversified Plan for Small Farms.” His philosophies were also summarized in a to-the-point bullet list known as “The Guru’s 10 Commandments.” Reading through a few of them, it is clear that Dr. Whatley was a man ahead of his time and quite funny too:

Dr. Whatley’s belief in the successful small farm was very innovative for his time, yet it’s now the focus of the good food movement today. His brilliant farming philosophies live on in today’s popular trends of sustainable agriculture and CSA farms, but few realize they have roots in black history. His book, Booker T. Whatley’s Handbook on How to Make $100,000 Farming 25 Acres, isn’t found on the shelves alongside Elliot Coleman, Joel Salatin or J.M. Fortier. And his ground-breaking idea for the Clientele Membership Club, that has given new life to modern agriculture as today’s CSA, is almost never credited.

In my work of amplifying stories of farmers of color, I have come across some amazing organizations working to unearth and preserve these kinds of stories. Organizations like the Black Land Project who help to clarify and give voice to agrarian history in communities of color, who also wrote about Dr. Whatley’s invention of CSAs in a 2013 Grist article. Agricultural professors such as Dr. Owusu Bandele, who studied under Dr. Whatley at Tuskegee and is featured in my book alongside the organization he co-founded: the Southeastern African American Farmers Organic Network, continue to spread smart, sustainable farming philosophies like those of Dr. Whatley and other black agricultural leaders. And this work is regenerating the black farming community, farmers like Sará Reynolds-Green and her husband Bill Green of Marshview Community Organic Farm, a SAAFON member farm and the only CSA farm on St. Helena Island in South Carolina.

Recognizing these agricultural stories in the black community isn’t just about honoring black history. It’s about recognizing the diverse roots and voices of today’s food movement, and realizing that the teachers we seek in this movement are right within our own communities. 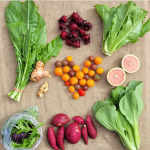