Tracking the Ancestry of Corn Back 9,000 Years.

By Sean B. Carroll 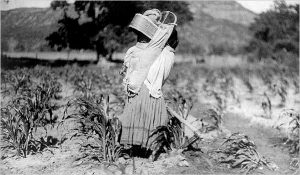 It is now growing season across the Corn Belt of the United States. Seeds that have just been sown will, with the right mixture of sunshine and rain, be knee-high plants by the Fourth of July and tall stalks with ears ripe for picking by late August.

Corn is much more than great summer picnic food, however. Civilization owes much to this plant, and to the early people who first cultivated it. Continue Reading Article from The New York Times

KING CORN tells the story of two friends, one acre of corn, and the subsidized crop that drives our fast-food nation. As the film unfolds, IanCheney and Curt Ellis, best friends from college on the east coast, moveto the heartland to learn where their food comes from. With the help offriendly neighbors, genetically modified seeds, and powerful herbicides, they plant and grow a bumper crop of America’s most-productive, most-ubiquitous grain on one acre of Iowa soil. But when they try to followtheir pile of corn into the food system, what they questions about how we eat—and how we farm.