Making good isn’t a part-time job, and neither is supporting what you believe in. Amy and John at Frog Song Organics Farm established their farm in Hawthorne nearly six years ago after they decided they wanted to promote healthy diets, a flourishing environment and honest compensation for tremendous work. Among these incredibly important ideals, they believe in spreading the message that is sown into the 63 acres of farm they own; put good in and get good out.

The many meanings of “Frog Song” describe what the farm hopes to teach. In the environment, frogs indicate health and quality. Recently, the Midwest has seen issues with their water in the form of mutated frogs, which can easily indicate poor water quality. The tie between frogs and producing quality food is clear and helps to inspire the standard at Frog Song Organics. 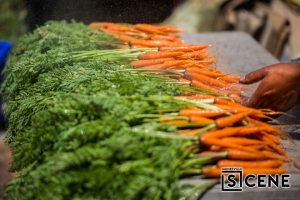 After graduating from the College of Agriculture at University of Florida, Amy had her entrepreneurial sights set on farming. She spent some time learning in Alachua County before moving to California in order to really understand more about the farming industry. While Santa Cruz was insightful, starting a farm seemed less realistic in an area where eating organic is the mainstream; Central Florida proved to be a breeding ground for supporting local.

“We wanted to come back to this area because we knew people would be supportive of what we’re doing,” Amy said, joking that every person in California knows at least one organic farmer. “There really is an awareness and a demand and a desire in the community for good food and for locally produced food. The downtown farmers market is alive, and people want to be there and people care about what we’re doing.” 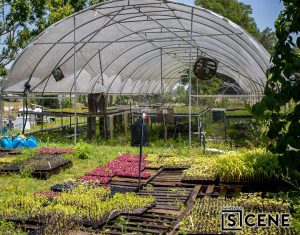 Currently in season at Frog Song are potatoes, carrots, squash beans and onions, with corn and watermelon being sown. While they have healthy crops available year round, seasonality is something some don’t understand. In other words: come get your okra before you can’t.

At the end of the day, the food you eat from Frog Song goes beyond its simple label.“When you choose organic food and support an organic farmer, it is really about so much more than whatever pesticides and toxins that you’re not getting in your personal bunch of carrots,” “It is about the fertilizer that didn’t leach down into the aquifer, it’s about the bees that are not dying from applications of pesticides on the flowers that they’re visiting, and it is about the worker that was not exposed to a toxic spray while applying the chemical who is then exposed to it again while harvesting the vegetable, and exposed to it again living next door to the farm that’s getting sprayed.”

There’s no wonder people are encouraged to choose local in any situation. The people who share their land with you and put work into it want the same things for their community. Through the H-2A program, foreign agricultural workers can receive temporary visas to work in places like Frog Song. Amy houses some  workers on the site, and advocates for their fair treatment at a time where politics can threaten their eligibility to continue working in the United States. While sourcing local workers, like their food, would be ideal, Frog Song has not been able to find enough local workers to fill positions. They are grateful for guest workers which make up about half of the farm crew in peak season. 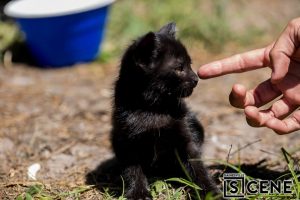 “We’re striving to provide as much as we can to provide the work environment that we would want to work in, so we pay everybody on payroll and pay our federal taxes and we pay for worker’s compensation insurance,” Amy said. “The crew we have right now just care so much about doing a really good job, and the quality of their work contributes to the success of the business which is what gives them longevity in their jobs.”

The latest in Frog Song technology is a  new website where customers can order online and pick up at the farm or farmers market.   The weekly CSA program offers members an opportunity to receive a variety of foods, recipes and education on a more ethical consumption. While Frog Song makes contributions to Central Florida grocery stores as well as restaurants and the farmer’s market, their dedication to being proud of what they serve to whom is the fuel for their passion.

“If I could have achieved anything 20 years from now, it would be to demonstrate that there is a way to run a financially viable business that respects its employees and doesn’t use toxic materials,” Amy said. “If I can accomplish that, I feel like I’ll have done something.”